Stack Road VFD and Rescue, Inc. has a response district of approximately 26 square miles and a population of nearly 3300 located on the southern portion of Union County.

Stack Road VFD responds to a average call response of nearly 250 calls a year,  with five apparatuses consisting of:

Stack Road VFD and Rescue, Inc. is managed by an eleven member Board of Directors who are elected annually in February by the community members.

Thanks to all who serve!!!

I would like to thank all personnel who generiously give their time to serve. Your dedication doesn't go unnoticed. 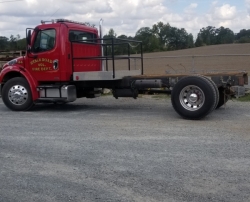 No birthdays this month

Copyright © 2006-2021. YourFirstDue Inc. All Rights Reserved. Designated trademarks and brands are the property of their respective owners. Content on this web site is supplied by Stack Road Volunteer Fire Department Rescue, Inc.. YourFirstDue Inc. cannot be held responsible or liable for any content, text, pictures, or any other media found on this web site. Maintained by the members and staff of Stack Road Volunteer Fire Department Rescue, Inc..
Management Login
Powered by